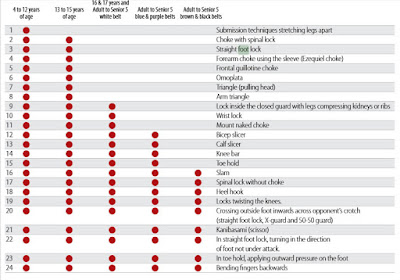 IMPACT BJJ GI TOURNAMENT INFO E RULES:
Length of BJJ Matches:
5 to 9 yrs: 3 minutes / 10 to 15 yrs old: 4 minutes
Our tournaments will follow this double elimination format.  If/when you lose a match you will be inserted into the consolation bracket to compete for 3rd place.  The competitors that continue in the winners bracket who make it to the championship round will be competing for 1st and 2nd place.
Two (2) person divisions will compete best 2 out of 3.
No advantages will be given.  If the match is tied at the end of regulation the referee will decide the winner based on who showed the most aggressiveness during the match.
BJJ Point System: (All positions must be held for 3 full seconds. It is good strategy to count to five before making a transition to a new position.)
Takedown: Opponent must land on back or butt and you must maintain top control for 3 seconds: 2 points
Knee on Belly: Must have opponent controlled on their back with knee atleast halfway across body: 2 points
Sweep or Reversal: Must initiate reversal from Guard and maintain TOP position for 3 seconds: 2 points Passing Opponent's Guard: Must have all arms and legs cleared from opponents guard/legs for 3 seconds: 3 points
Mount: Both knees and feet must be on ground with opponents leg cleared from your body for 3 seconds: 4 points
Back Control w/ Both Hooks Inside: Figure four does not count as points. Hooks in for 3 seconds: 4 points
Detailed Rules: The object of the competition is to control and submit your opponent.
BJJ Illegal Techniques:
Kids: No leg locks, No frontal guillotine, No neck cranks, No twisting submissions. Kids matches will be stopped at the Referees discretion at any time during the match if the Referee believes it is in the best interest of the child’s safety. It is imperative that coaches and parents both understand that we are here to look out for the children’s safety first and foremost. We are not concerned with who wins and loses and will have no tolerance for coaches and parents that cause a commotion due to a referee decision.
Slamming: ZERO tolerance on slamming. This is to avoid slamming to escape the guard and various submissions from the guard. A competitor will be immediately disqualified NOTE - Takedowns are not considered slamming, unless intent to injure is determined by the referee.
NO Suplex takedown technique, landing with the opponent’s head or neck on the ground.

Illegal Techniques in all divisions: No strikes, biting, eye gouging (includes chin to eye), head butting, small joint manipulation (finger and toe locks), hair pulling, and ear pulling.
All male competitors are not allowed to wear clothing underneath the GI such as t-shirts, rash guard, sweatpants, etc.  also, wrestling shoes are not allowed.
VERBAL COMMAND: COMBATE (com-ba-tchee) FIGHT!
VERBAL COMMAND: PAROU (pa-row) STOP!
*Code of Conduct* : We will be enforcing a zero tolerance rule on disrespecting, threatening with physical violence, or verbally abusing referees or staff at any time before, during, or after the event. If any spectator, coach, or competitor threatens or abuses the referee in any shape or form, they will be escorted out of the building.

Posted by brazilian jiu-jitsu at 12:30 PM